The square house, as it name says, is in the essence a square box. The size is very flexible as you can line up several units and create a bigger room by leaving off the walls.

The most simple and cheap version is house consisting of a single room and covered by a roof as shown in the following picture.

The construction is based on the same design principles (stable, easy to construct and disassemble).

The major difference to traditional prefabricated houses is the the potential assembly on site which allows massively reduced transport volume and the possibility to build bigger structures without heavy machinery. 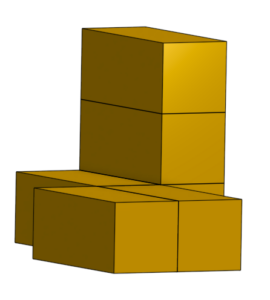